A trip to Lublin, Poland on the last day of September. I was visiting my sister and friends in Krakow one weekend, and it turned out she needed to go to Lublin for work. As I've never visited that side of the country and I love road trips, she thought I might be interested in coming and exploring the city a little bit. Her husband came as well, so I had company in my little adventure.

We left the house at an ungodly 6 in the morning. The advantage to being out so early is, of course, the possibility of witnessing the sunrise.... There was some pretty looking frost on the fields as we drove by, and the morning light (oh, the beauty of the morning golden hour!) did not disappoint either! 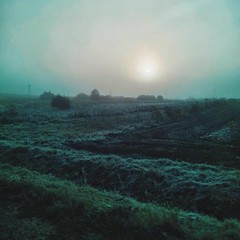 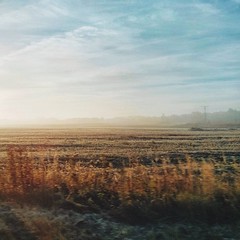 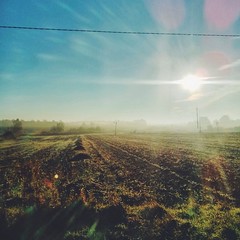 I did not know what to expect, and, honestly, did not even prepare myself (i.e. I didn't do my tourist homework before we left) for this trip. Lublin turned out to be a city of architectural contradictions which possibly is a good metaphor for its rises and falls throughout the history.... Brand new, beautifully renovated, or just well taken care of buildings (including the castle, that looked as if it has just been built) neighboring old and falling apart ones.

It is a decent-sized city (population of almost 350,000), and the largest east of the Vistula river in Poland. It used to be a huge cultural, commercial and industrial center since the 14th century (it was established in the early Middle Ages), especially after the Union of Lublin (proclaimed here, and named after the city), that created the Polish-Lithuanian Commonwealth. Casimir the Great had a masonry castle built (the original structure was built in the 12th century), as he was aware of the city's strategic importance, and had it surrounded with defensive walls.

It was called the "Jewish Oxford," as students would come to study Talmud and Kabbalah here, before it became a Nazi strategic center for the extermination of the Jews. It was conquered, subdued to different occupations (Austrian, Russian, German), and finally got a chance to redefine itself (with the help of the Solidarity movement as well) as a city in the "free Poland" of the end of the 20th century. The city is still struggling (its region had the lowest GDP in the EU until Romania and Bulgaria joined), the salaries are lower than in other parts of the country and there don't seem to be a lot of industries at the moment (except for some IT companies having their HQs setup here for 2/3 the price of Warsaw). What an interesting concept: the biggest employer at the moment is the Marie Curie-Sklodowska University, and students make up around 35% of the population. There is a local brewery Perla, as well, that is looking to expand in the country. The city is lively with cultural events: there are multiple theaters, galleries, the philharmonic, and numerous festivals taking place throughout the year. All in all, a fascinating place with rich history, beautiful sights and perspectives.

My sister dropped us off somewhere, but we managed to find the downtown and proceeded to the tourism office, to find some information. As it was Monday, all but a couple of the museums were closed. We didn't mind, it just meant more walking around the city itself. The weather was pleasant, so the idea seemed quite appropriate. We encountered a very eager and knowledgable person at the tourism office and got more than enough information for our day trip.

First stop on our map was the Main Square. It was small, surrounded by colorful buildings and shadowed by the centrally-located Crown Tribunal, as well as the Trinitarian Tower on one end. Some people call it "little Krakow" because of the architecture, but to me they are pretty distinct. Nonetheless, the ambiance was really nice, even though the square was virtually empty. We took a tour of the underground tunnels which used to be super vast and served as both transportation and storage for the locals, that was both informative and entertaining (the devil himself showed us around and told us the story of the city). 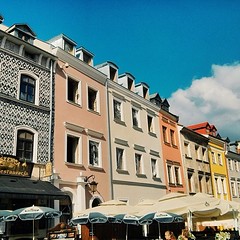 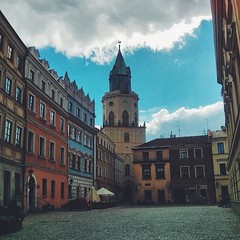 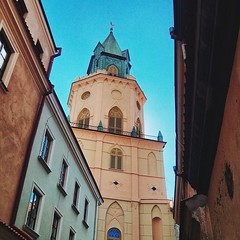 The tour of the underground tunnels finished at the Po Farze Square. It hosts a miniature of the gothic-style St. Michael's church that used to be situated here, but was destroyed during the city's big fire in the 18th century, as well as the church's remaining foundations. There is a good view of the castle that is situated nearby. As we moved along, we passed through the Fish Street (ulica Rybna). Lublin is far from the Baltic Sea (or any other sea for that matter), but there is a lake nearby where the fishermen used to get their fish from. They would later gather around what became to be known as the Fish Street, and sell their bounties. Such a pity to see it go to ruin, after being so important for the city and one of its industries! 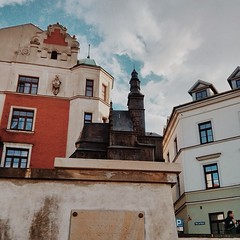 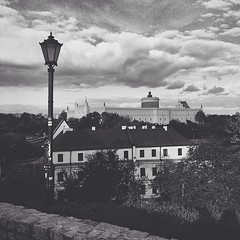 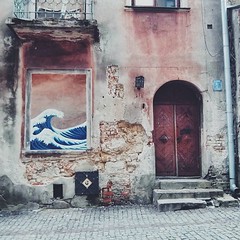 Finally -- the Royal Castle! The building looks brand new, even though it dates back to the 12th century (14th, if you don't count its pre-stone days). There is a museum (closed on Mondays), the Holy Trinity Church (that served as the royal chapel), as well as a 13th century keep (fortified residency/tower), which is the oldest standing building in the whole city. There was some art exhibition happening at the courtyard when I visited, which seemed like a practical use of this open royal space. 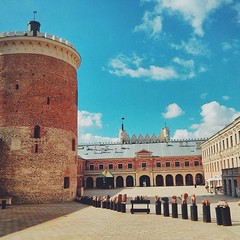 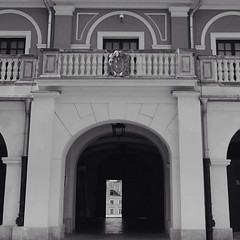 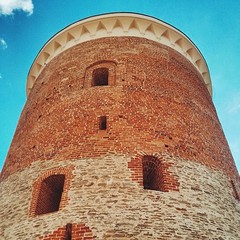 We were advised to visit at least two of the churches in Lublin. One was the Dominican Church, which was built more than 750 years ago, and later rebuilt in the Lublin Renaissance style. We stepped inside and noticed the modesty of its beautiful design, a solemn ambiance and a beautiful light inviting itself through the tall windows. It is built of multiple chapels, funded by prominent families and decorated with various forms of art. On the western wall there is a famous painting picturing the big fire of Lublin of 1719 that started in the Jewish district by a thunder hitting a straw roof, and which was "miraculously" saved, according to the legend, by the Dominican monks' prayers for the rain.... When we stepped outside, we noticed a couple wearing their wedding clothes and getting their pictures taken. A new beginning in these old walls.... 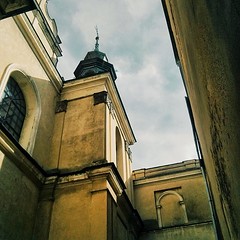 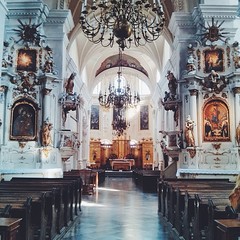 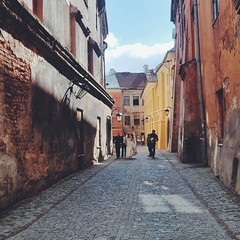 The second church we were advised to see was the Baroque St. John the Baptist and St. John the Evangelist Church, which was built and rebuilt since the 16th century. Such a beautiful structure! The interiors were simply breath-taking: beautiful chandeliers, frescos made by a famous 18th century painter (that create an illusion of the church's greater size than it is in reality), the ebony altar built from the Lebanese pear wood, famous paintings that carry stories and legends (Crying St. Mary), and tricky acoustics that let you hear the slightest whisper from one corner of the church in the very opposite.... 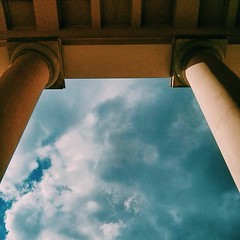 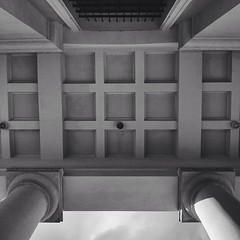 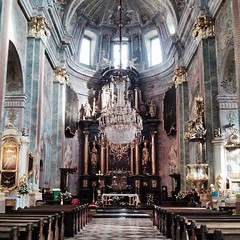 After lunch at the famous and somewhat fancy "Devil's Paw" (Czarcia Lapa) restaurant and a couple of Perla beers, we set out for our final tour of the old town, before we were scheduled to meet my sister after work. We found the Lublin History Museum, an example of a modern, multi-media, overpacked with information but smallish museum. We took a quick tour, found out, amongst other, more important information about the city itself, that it was women of the Ancient Egypt that used to brew beer, and that it was a drink of choice for everybody, as the drinking water was so filthy. There were some train tracks and a video of an approaching train constantly played in one of the rooms (pictured). Not sure what was the exact reason for that, but it did attract all of the visitors' attention pretty successfully. We decided that called for another Perla before we leave this city of contradictions and really decent beer, too! 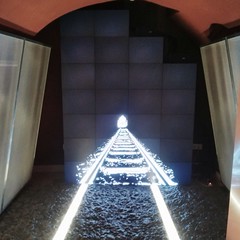 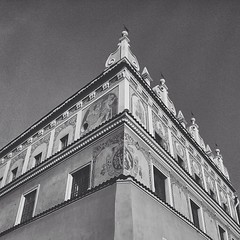 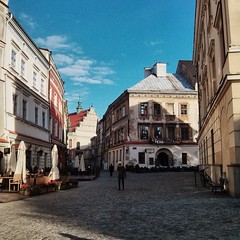